Paul and the Stories of Israel: Grand Thematic Narratives in Galatians 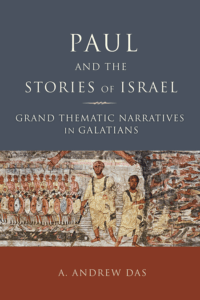 Paul and the Stories of Israel: Grand Thematic Narratives in Galatians

Much recent scholarship on Paul has searched for implicit narratives behind Paul’s scriptural allusions, especially in the wake of Richard B. Hays’ groundbreaking work on the apostle’s appropriation of Scripture. A. Andrew Das reviews six proposals for “grand thematic narratives” behind the logic of Galatians—potentially, six explanations for the fabric of Paul’s theology: the covenant (N. T. Wright); the influx of nations to Zion (Terence Donaldson); Isaac’s near sacrifice (Scott Hahn, Alan Segal); the Spirit as cloud in the wilderness (William Wilder); the Exodus (James Scott, Sylvia Keesmaat); and the imperial cult (Bruce Winter et al.). Das weighs each of these proposals exegetically and finds them wanting—more examples of what Samuel Sandmel famously labeled “parallelomania” than of sound exegetical method. He turns at last to reflect on the risks of (admittedly alluring) totalizing methods and lifts up a seventh proposal with greater claim to evidence in the text of Galatians: Paul’s allusions to Isaiah’s servant passages.

At a time when ‘subtexts’ and ‘implicit narratives’ are all the rage, Das insists on some core scholarly virtues: rigorous method, unforced exegesis, and the careful weighing of evidence. Although many of the hypotheses he tests come up short, Das’s argument is not simply negative. His many fruitful suggestions, alongside his wise words of caution, deserve careful attention from all readers of Galatians.

Many New Testament scholars are given to finding ‘grand thematic narratives’ in various places in the New Testament, especially in Paul’s letter to the Galatians. A. Andrew Das ends up showing that there are a lot of ’emperors’ running around loose without sufficient clothing. I commend Das’s attempt to bring methodological clarity to an area that has been given over to far too much speculation that has left the text of Galatians behind and entered into various types of ‘piling on’ of supposed evidence. This does not mean that there are not stories to be told even in Galatians, but Das rightly calls for them to be grounded in what Paul himself says, not in what we might wish he had said.

In this methodologically sophisticated study, A. Andrew Das conducts a careful examination of the evidence for various scholarship claims regarding the influence of biblical narratives on Paul’s letters and finds them wanting. In the process, he lays out a critical roadmap for the other scholars to follow in analyzing similar claims in the future. This is exactly the kid of sober analysis that has been missing from so much recent work on Paul’s engagement with Scripture. Those who work in this area can learn much from Das’s clear-headed model.